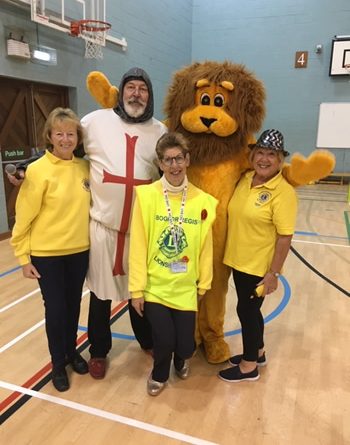 The aim of this page is to explain how the Lions Clubs of Zone 1B in Region 1 of District 105SE comprising the Clubs of Bognor Regis – Chichester – Midhurst – Selsey – Southbourne – Witterings organise and run a Knockout games day for adults with severe learning difficulties. Obviously, the guidelines that follow are based on our experience here in Zone 1B, and modifications to suit local circumstances will undoubtedly be necessary. A small organizing committee will be needed – two or three Lions should be sufficient. The day itself requires a fair amount of paperwork that, initially, may seem a little daunting. Here paperwork production is streamlined by using a home computer mainly in ‘Word’.

1981 was the International Year of the Disabled Person, and so in June of that year the Harrow & Pinner Lions Club decided to run an event for a group of people who were severely disabled but to a large extent ignored by the public. Mentally handicapped adults was the group finally chosen, mentally handicapped children already having the sympathy of the community. This event was planned as a one off day in recognition of the International Year of the Disabled, and eight Centres were invited to participate, which, with the ‘supporters’ that turned up on the day meant 800 people had to be accommodated. The day proved so popular that a repeat for the following year was requested. The Lions responded but as news of the event spread they were receiving requests from other Centres who wished to participate. 800 mentally handicapped adults were about the maximum number that the Lions could handle on the day so the solution was found by running the event twice a year. This still happens today at Harrow, usually in March and November.

BBC Television’s ‘Its A Knockout’ was the inspiration for the Lions event and participants are drawn from local Day Centres who are encouraged to get their teams sponsored. This allows the Centres to raise funds for themselves as well as have fun. In the following pages a typical Zone 1B Knockout involving eight Centres will be described (with differences for a six Centre event in parenthesis). Specimen paperwork for both is included in the appendix.

The event will probably be classed as an outing by the Centres and will have to be fitted into a working day: i.e. participants will usually depart from and return to their Centres between 09.00 – 17.30. Packed lunches are provided by the Centres and/or their clients. The Centres are responsible for transport on the day.

Every encouragement should be given to the most handicapped people to take part.

It is intended and encouraged that participating Centres bring along supporters to the event, and so its scale is likely to be determined by the size of venue available.

A public address system will certainly be needed.

There will be many aspects of safety and security to consider. These will be unique to each event and require detailed discussion with the manager of the chosen venue. It is highly desirable that a scale drawing of the venue is produced. This will show the playing area, seating arrangements, toilets, fire exits, etc. A drawing for our venue Bognor Regis is on page 5. First Aid facilities should be available, either provided by St John Ambulance or similar.

Each Centre provides a team of eight players – preferably four men and four women – with two reserves – all dressed in a team strip. Details of the games are supplied to each Centre four to six weeks prior to the event to allow time for practice before the day. On the day, all teams play all games and all the other teams. Each game should only last about ten minutes. Details of our games are described in page 6.

For sponsorship purposes it is necessary to ensure that all teams score well, especially if they include severely handicapped members and perhaps sacrifice the chance of winning the game as a result. Scoring is therefore made as close as possible. For added excitement, each team can play their ‘Joker’ for one game when the points are boosted. Points are awarded as follows :-
Standard Game
Win: 7points (7)
Lose: 6 points (6)

Trophies are awarded to all teams taking part with no vast differences between the three top cups. The 4th to 8th (6th) trophies are identical. The team with the most ‘bonus’ points is presented with the ‘Spirit of the Knockout’ Trophy to be held for one year.

At the end of the day every competitor and substitute is presented with a certificate, with their name on it, signed by the Zone Chairman or other senior Lion present. The certificates are preprinted but the individuals names are inscribed by a ‘Scribe’ (i.e. a Lion who has learned how to write neatly). Note – there will be 80 (60) of these to complete and Team Leaders should submit a list of competitors names to the M.C. on arrival.

All concerned should arrive early at the chosen venue to decorate the hall and check the PA system. The club will have decided in advance where the teams and their supporters are to sit. Team Lions should meet their respective teams and guide them to their correct seating areas.

The first games of the day should be set up by the appropriate Team Lions and Games Referees according to the Game Plan.

The Robin Hood in Bognor is our meeting place